The QX95 is designed for people who love to fly from the aircraft’s perspective, and it’s one of my favorite RC aircrafts of the year.

Some people spend thousands of dollars a year on aircrafts and parts, and it can quickly become an obsession. When you fly an aircraft for the first time, you like the experience and want to try it again, and you keep looking for ways to improve on the experience.

The goal of FPV flight is simple: fly from the aircraft’s perspective using VR glasses. When you try it for the first time, you realize why it’s so popular. Honestly, it’s not as hard as you might think. It’s a skill anyone can learn. It just takes the right aircraft.

Eachine knows racers, and they’ve produced racing aircrafts of every shape and size. They pioneered the idea of the low cost FPV racing and helped bring it into the budget of the average man.

Most FPV racers are brushless aircraft, and that adds a lot to the cost. You have to consider the cost of each motor, which is $10 or $20 each; and you need a speed controller for each motor, which is another $5 per motor. They require a lot of power, which means big batteries and hefty electronics. Good FPV cameras and video transmitters are costly as well. The point is that a low cost brushless racer will cost around $130.

Now let’s compare that to the QX95 nano FPV racer. It uses brushed motors and smaller components and sells for $60 to $70. Replacement parts are also much cheaper. Motors are $2, and you don’t need speed controllers and the camera and video transmitter, which are $24 all in one unit.

The aircraft is much cheaper to repair. It’s smaller and more agile, so you can fly it inside or outside. It’s safer and easier to use, and it is insanely fast and powerful.

The QX95 has a few major improvements over previous Nano racers. Eachine is constantly working on and improving the Nano racer concept. The first improvement is a new all-in-one flight controller/receiver. Previous Nano racers required a stand-alone Nano receiver that had to be soldered in place.

There are multiple receiver options. Most importantly, they have a FLYSKY version, so you can use your FSi6 transmitter. You can get a FRSKY version that will work with your Tarranis transmitter, and you can get a DSMX/DSM2 version that will work with your Spectrum transmitter. You can even get a version without a built-in receiver so you can add your own personal Nano receiver.

Another upgrade is the fact that they added plugs on the flight controller for the motors. On previous racers, if you had to replace a motor, you had to solder it in place; but now it’s a quick plug-and-play process.

They also added a light bar to the back of the racer with stop and turn signals so that other racers are less likely to hit you because they will have a heads up when you’re turning or stopping.

One of the best improvements is the camera/video transmitter. It’s also the most expensive component at $24.99 for a replacement. From previous models, they improved the range, decreased interference, and made the picture better.

Eachine pioneered the idea of Nano racing, and I am a huge fan of the cameras they use because they are constantly improving and upgrading them to stay ahead of the curve.

The QX90 is the looker of the bunch. There’s nothing wrong with the way the QX95 looks, but it’s just that the QX90 looks like the faster aircraft with its X frame and central mounted camera. If you were to just look at pictures, you might ask, “What’s the point?” The answer is that it flies better, gets better range, is more dialed in, and has a better camera and flight controller.

It’s made from a carbon fiber base plate with a second plate over the electronics to protect them. The motors are held in place with rubber grommets, and the camera is held in place with sticky foam and a rubber band. The way they mount the camera may seam strange and simple, but it allows it to absorb crashes and reduce vibrations.

Everything is tightly packed on these aircrafts, but it is surprisingly durable and able to handle several crashes without sustaining damage.

You will need a transmitter. I used my trusty FLYSKY FSi6 transmitter, and you will also need tweezers to put the aircraft into bind mode. They’ve really simplified the binding process.

Binding to your QX95

If you’re using an FSi6 transmitter, turn off AFHDS in the transmitters menu. Next, while plugging in the aircraft’s battery, touch the pair of tweezers to the pair of solder points on the front right side of the flight controller board with the word bind under them. This causes the aircraft to go into bind mode. Hold down the bind button on your transmitter and switch it on. It should bind to the aircraft instantly. You will notice the blinking green light on the flight controller will change when it goes into bind mode, and it will change again as soon as you are bound. Turn the transmitter off and on to see if the green light turns on and off to make sure you are bound.

You may need to go into the transmitter menu and set auxiliary Channel 5 to SWA (switch A). It is the switch that is pre-programmed to arm and disarm the aircraft.

Everything has been programmed with clean flight and is all very nicely dialed in. You can easily add extra flight modes like full acro, but the standard flight settings are great.

The manual is also a nice improvement. Previous manuals were basically a single piece of paper. Now it is actually a small book with instructions for binding to multiple transmitters and programming settings.

This aircraft feels great right out of the box, and the tile lights are insanely bright. You’ll have no trouble seeing them, and they actually give a lot of information about your throttle, speed, and direction. The faster you go, the bluer they get. When you turn left or right, they blink a bright yellow; and when you stop, they go solid.

You can literally fly this aircraft anywhere: in a small room, around the house, under the table, around the back yard, through trees and obstacles, and in buildings or factories. The whole world suddenly becomes a giant race track.

I had a lot of fun flying it in the park. I was able to go full speed through gates and obstacles, and I had a great deal of control at high altitudes and over turns compared to a brushless racer. I was able to fly through places faster and with more confidence than ever before.

The pre-programmed settings only have one flight mode, but if you want to add multiple modes, it’s as simple as connecting a USB cable and using clean flight.

This aircraft is perfect for both hardcore racers and brand new pilots. It’s good for people who want to get a bird’s eye view of things or people who just want to give virtual flights around the house to friends and family. It’s fast and precise, strong and reliable, and small and refined.

I’m glad that they offer options for nearly every common transmitter out there, but I prefer the FLYSKY version. I’ve become a fan of FLYSKY transmitters and receivers over the last year.

The camera is awesome. It has a great picture, great range, and it handles low-light conditions quite well. It also has a great lens with a wide field of view. 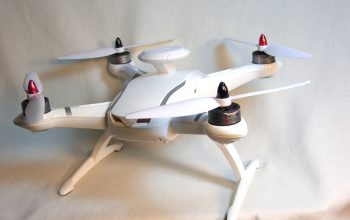 If you’re a budding cinematographer, if you need an aircraft that can fly itself, or if you just like video games, you should check out the new CG035. Brushless...

This is the Nano racer that I recommend people buy. Eachine put a lot of work into it, and it paid off. The improvements over the QX90, QX80, and QX73 are worth spending a few extra bucks.
7