The H6D looks very enticing to someone who wants to get started with FPV flying, and

JJRC has produced more inexpensive quad rotors in the past year than I care to mention. They have countless camera drones, micro drones and FPV drones on the market. They gave us the amazing X1 brushless quad that sells for just over $100, and they seem to come out with a new aircraft almost every day.

The H6D is designed to be an all-in-one FPV system for less than $90. It’s a palm-sized quad rotor with a built-in 5.8 GHz FPV camera. It comes with a 5.8 GHz monitor that attaches to the transmitter and a 4 GB micro SD card that slides into the aircraft and records video.

The broadcasted video stream and the recorded video stream do look different. The micro SD card records clean HD video, and while the aircraft can broadcast a good video stream, the frame rate drops when the aircraft begins moving too fast. I think that this is because of the stock antenna on the aircraft. I tested the included video monitor next to a high-quality video monitor and the video quality looked almost the same. It is a bit dimmer, but not by much. I was able to get a pretty good range with the stock system; there was a little static and some frames were lost, but the range was good. I think a better video antenna would really help.

The battery system is the good old-fashioned micro T connector system that the X4 and countless other aircraft use, so finding extra batteries and chargers is easy. It also uses the same propellers that the X4 and many others use.

This aircraft looks very familiar; in fact, at first glance, it looks an awful lot like a Hubsan X4. When you look closer, you will notice some added spikes and details, but they basically look almost the same. The main difference is that the plastic used to make the canopy is much thinner, which is a fatal weakness; the plastic used to make the body is so fragile that I wouldn’t recommend crashing this aircraft into hard surfaces. I also strongly recommend that you put some tape around the rotor arms to reinforce them.

This aircraft is fragile and can easily break during shipping; mine had a broken rotor arm and was completely useless when it arrived. The way the aircraft is packaged isn’t very good. The aircraft barely fits in the tiny box and it sits right on the top, so anything that lands on the box can crush it. The way a company packages an aircraft is almost as important as the aircraft itself.

I had to contact the seller and have them send a new body before I could even test the aircraft. It wasn’t difficult to replace, but it was a little time-consuming and annoying. The most disappointing thing was that the new body broke after only 2 flights. It suddenly had a big crack through one of the rotor arms, but I don’t even remember crashing it. After that, I just decided to reinforce the rotor arms with duct tape, which seems to work. If you buy one of these, I highly recommend you do the same.

The software is pre-tuned with no programming options available, so you’re stuck with the stock settings. The maul is pretty standard; it’s worth taking a look at, but there’s nothing special.

I can’t really say how this aircraft flies out of the box, because I had to rebuild mine before I could even fly it. The overall flight experience for me wasn’t bad, but it wasn’t amazing. It didn’t give me that “on rails” feeling that some aircraft inspire, and you have to stay on top of this aircraft at all times.

Other than a little trim, I didn’t need to tune anything. I haven’t upgraded the aircraft’s video antenna, but that is definitely something that I would like to do

This aircraft has an amazing range of speeds to choose from. You can go from 10 percent all the way up to 100 percent and anywhere in between.

I like to keep it around 25 or 35 percent most of the time. When it comes to flying this aircraft indoors, it’s very smooth and peppy. You can fly around your living room all day and have a great time. Outdoors, it can handle the wind and it’s very fast, but once you start going fast, it’s a little less stable, and it’s easy to overcorrect.

It has the standard one-button flip and headless mode, as well as an auto return feature, but those are all pretty standard and not major selling points.

This aircraft is aimed at people who want to start flying small FPV aircraft without spending too much money. I tried it with my FPV glasses and was able to do a little FPV flight, but the frame rate was a bit low. I didn’t have any range issues and was able to achieve some nice high-altitude flight. I was happy with the transmitter’s range overall and never lost the signal, but I would have liked a more consistent frame rate with the FPV video.

I really like the provided transmitter; it’s laid out more like a hobby-grade transmitter and has some very nice features. It’s also the only transmitter I’ve ever seen that has reversible transmitter sticks. You can literally pull both transmitter sticks out, electronics and all, and switch them to the other side so that the throttle stick is on the left or right side. It’s beautifully designed and only takes a few seconds to switch the 2 sticks around. It also has a great dial for setting your speed. It gives you a lot of control over the aircraft’s speed and performance; the yaw, however, is always the same speed.

The only telemetry you get is how long the camera has been recording and how much recording time it has left; it doesn’t transmit voltage to the on-screen display.

The monitor is easy to attach to the transmitter and it has its own rechargeable 3.7-volt 600 mAh battery, so it can work as a standalone monitor.

The only down side of the monitor is that it’s locked into one frequency and, as far as I can tell, doesn’t have a frequency search mode. The only way to use it with another aircraft is to find out what frequency the monitor is set to and then set your camera to transmit on that frequency. Both the aircraft and the monitor are pre-set to the same frequency at the factory and I haven’t found a way to change either one of them.

The video looks fine; it’s HD and not shaky, but it doesn’t handle low light conditions very well. The recorded video looked better than the video on the monitor; if it just had a better antenna, it would probably have a better FPV frame rate.

You can’t change the camera’s angle, and it has a slight downward tilt that I don’t care for; I would have preferred it to point straight ahead. All together, the whole system was pretty easy to use, and the monitor and camera were always connected to each other. The transmitter did a great job and the aircraft wasn’t bad, it just wasn’t as good as it could have been. 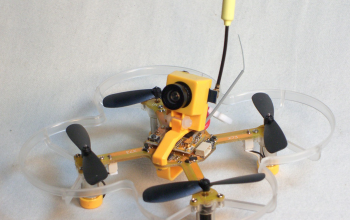 Do you remember when you first learned to ride a bike? The world changed overnight, and it raced by you as the wind blew back through your hair. Your view of th...

If this aircraft had a stronger shell, a better FPV antenna, and a search feature on the video monitor, it would be an amazing aircraft at a great price and I would strongly recommend it. However, the plastic frame is just too brittle and the low frame rate of the FPV video is a bit disappointing. Considering the camera can transmit a really nice video signal at a good frame rate, with a little bit of work and a few upgrades, this could be a great aircraft. As it stands though, the stock system is a little bit of a let down.
5